All this week there have been celebrations of Ireland's only living Nobel Laureate - poet Seamus Heaney who was 70 last Monday. I have to confess I know nothing about his poetry, and have never to my knowledge read any of it. I don't recall if his poetry was on the English syllabus while I was in school - but that was the 1970's which was early in Heaney's career. Even though he is the most famous living Irish literary figure I have no plans to read any - such is my disinterest in poetry.
I do have something in common with Seamus Heaney - he was conferred with an honory doctorate (D. Litt.) in Trinity on the same day as I was conferred with my PhD on 8th July 1988. This was before he was awarded the Nobel Prize for literature in 1995 - I had no idea then that I was in the presence of greatness. I have kept all the ceremony documents to this day - also receiving honory doctorates on that day were scientist John Stewart Bell and Bishop Donald Caird. The citations were read out in latin - in fact the whole ceremony was in latin. Thankfully, translations in English were provided for the citations. For interest, here is what Trinity said about Seamus Justin Heaney: 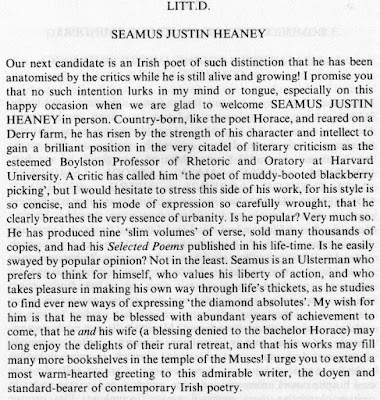