UK Election - How did the pollsters do?

The final YouGov poll before yesterday's general election in the UK predicted the result as follows: Conservatives (42%), Labour (35%), Liberal Democrats (10%), UKIP (5%), and Others (8%). In their final statement before the election they stated:

For now, YouGov’s final call for the
2017 election is for a seven point
Conservative lead, leading to an
increased Conservative majority
in the Commons. 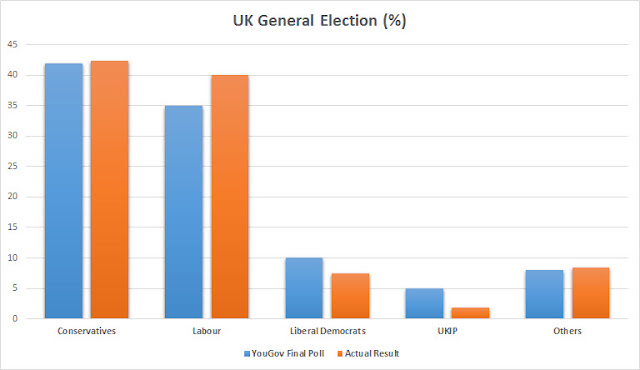 The poll was almost spot on for the Conservative and Others vote, but it underestimated the Labour vote by 5% (more than the +/- margin of error), and over estimated the Lib Dem and UKIP votes. So they got the overall result they predicted (an "increased Conservative majority") wrong, but not by much in my opinion. The science of sampling clearly has some work to be done, but I believe that the approach of YouGov to include factors (such as age, likelihood of voting) other than voting intention is a good approach - they can only get better.