Leo Varadkar and the New Generation

So - the new leader of Fine Gael is 38 year old Leo Varadkar, and he is to be our new Taoiseach next week. He has made headlines all over the world as the son of an Indian immigrant to Ireland made good, and of course as the country's first openly gay Taoiseach. I wish him well, but he needs a mandate from the people very soon and I hope he calls a General Election before the end of the year. I admire Leo Varadkar as a (so far) straight talking politician. He is courageous and I was one of the many who was listening to the Marian Finucane radio show when he said all of a sudden "I am a gay man". His statement yesterday that "prejudice has no hold in this republic" is a powerful message to all Irish people.

I met Leo Varadkar once at the Irish Blood Transfusion Serve awards when he was Minister for Health. He presented me with my award for 100 donations and in the few seconds we had before the photo below was taken he congratulated me and asked where I was from. I was struck by how tall he was and how young too. Apart from Brian Cowen, who is three months younger than me, all Taoisigh that I have ever known were a lot older than me. Now suddenly our new Taoiseach is almost 20 years younger than me! This does signify a generational change greater than anything we have ever had in Ireland before. I have never voted for the Fine Gael party in my life, but I might do so now that Varadkar is at the helm. 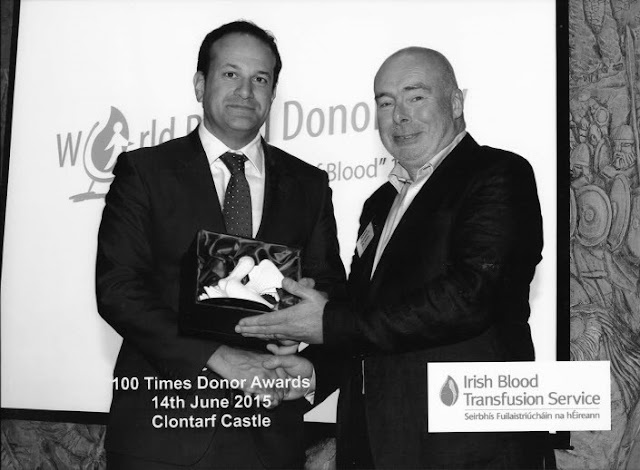