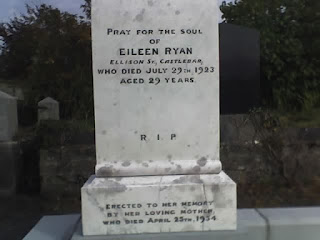 Eileen Ryan died on 29th July 1923 - I'm told as a result of tuberculosis. She had a long obituary and the clipping from a newspaper (possibly The Connaught Telegraph) survives in the Eileen Ryan Collection. Among the mourners were her sister Gabrielle "Mrs Bourke", and "Gus Bourke (brother-in-law)" - these are my wife Roma's paternal grandparents. The funeral service had seven priests, which must have been a mark of great respect that was held for her. She is buried beside the Republican Plot in the Old Cemetery in Castlebar - I'm told that she wanted to be buried in the Republican Plot (which contains the remains of IRA men killed in an ambush during the War of Independence), but that the family were having none of that - though she was buried beside it instead.

The last part of the Obituary is a "Who's Who" of republican names from 1923 in the "Wreaths were sent by:" section. Mrs Eamonn Ceannt (wife of executed signatory of Proclamation) wrote "to darling Eiblin, one of Ireland's silent heroines". Mrs Pearse (mother of Patrick and Willie) wrote "in loving remembrance of one of Ireland's noblest daughters". There are also messages of sympathy from Dr Kathleen Lynn "in deepest remembrance" and Mrs (Madeleine) Ffrench-Mullen "in loving memoy of Ireland's noble-hearted child". Lynn and Ffrench-Mullen founded Inghinidhe na hÉireann (Daughters of Ireland), and they were also lovers. A message from Ronan Ceannt (son of Eamonn Ceannt) states "in fondest remembrance of dear Eileen". Finally, Castlebar Sinn Féin Club's message reads "To God and Ireland true".

There's no doubt that Eileen Ryan was held in high esteem, though it is a pity very little is known about her. Recent remembrance of events in 1916 have recognized and emphasized the role of women during this turbulent period in Irish history. Perhaps some day her story will be told. 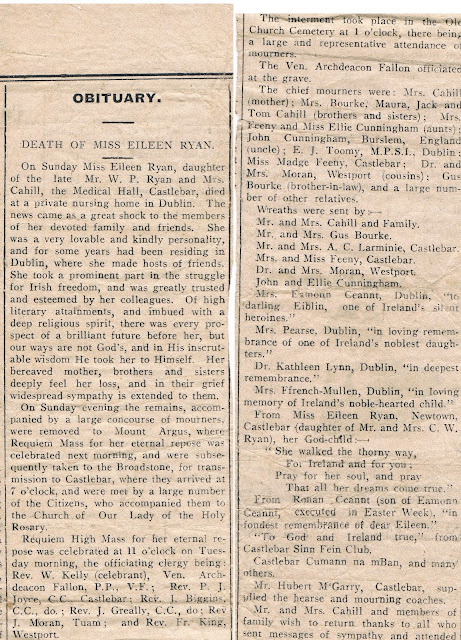