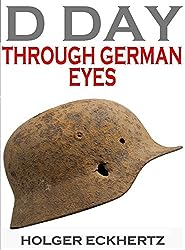 This book has to be one of the most fascinating and saddest books about the Second World War that I have read. When we thing of D-Day in 1944 and the brave advancing Allied troops assaulting beaches in Normandy, we don't often think of the German men and boys who were waiting for the invasion of Europe. This story is fascinating in that it is not Holger Eckhertz's story, but one of his grandfather Dieter who in 1954 interviewed many of the German survivors of D-Day. As in all battles, it was a fight of two forces. In 2008 I visited the German War German War Cemetery at La Cambe in Normandy, and noted that there were 21,000 soldiers buried there. Below in a photo I took at the cemetery - I couldn't help thinking at the time (and now) that there were probably fuck all Nazis buried there, and that they were ordinary lads like me.

Eckhertz's book paints a picture of German soldiers defending what they thought was Fortress Europe against invasion. Their war was one one endless waiting only for the fighting to be over in a few hours, sometimes minutes in savage fighting on both sides. The interviews for the book are with German survivors of the battle, and they describe the overwhelming odds that the Allies possessed in equipment and men. Waiting in a so-called Tobruk was a nightmare - many Germans died in flames without ever seeing an American/British/Canadian soldier.

This book is short and quick to read. Regardless of your politics and thoughts about that bollix Hitler and his bollix henchmen - the lads who manned the guns on D-Day to defend Europe against the allies were only doing their duty - which in the end was to die.