While reading David McCullagh's excellent new book about The Wright Brothers, I heard about a commemorative stone in the townland of Crane near Monageer in Co Wexford and decided to go along for a look.

The stone is located on Google Street View here, and I have also uploaded it to the Open Plaques Project here. To the left is an image of the Bleriot XI that Denys Corbett Wilson flew after it crash landed. Wilson was a pioneering aviator - here is his Wikipedia page.

At 7.47am on the 22nd April 1912 he set out from Pembrokeshire in Wales and after about 100 minutes he crash landed in Crane. A hundred years later the flying route from Britain to Ireland (London-Dublin) is one of the busiest air routes in the world.

Denys Corbett Wilson was killed in World War I on 10th May 1915 when his plane was shot down during a reconnaissance mission over France.

Below is the granite commemorative stone - it does seem odd that the Corbett Wilson Committee erected this in "April 22nd 1987". Perhaps this is a typo? 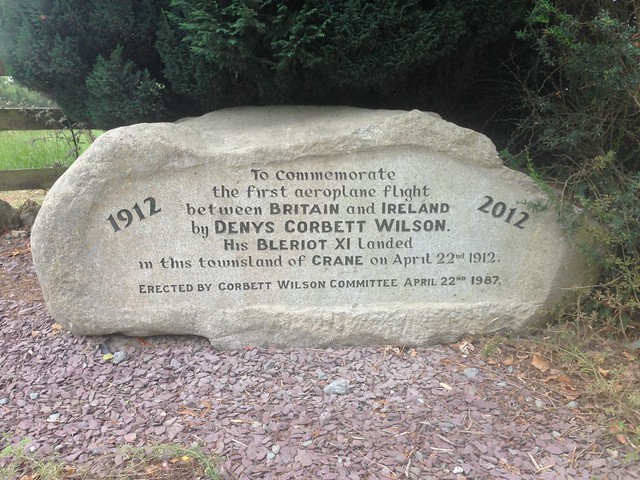