Finally - a play-off success for PNE (tenth time lucky!) today with a 4-0 win over Swindon Town in the League One play-off final at Wembley. It has been a great season, but with a hiccup on the last day meaning the play-offs were the route to the Championship rather than automatic promotion. In truth it was a easy win for PNE despite Swindon dominating possession. The hero today was Jermaine Beckford with a hat-trick, and I'm sure that everyone in the City of Preston will celebrate today's win. 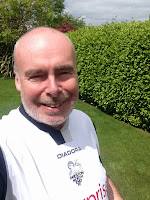 While scoring a hat-trick at Wembley must be the stuff of dreams, the reality for Beckford and the rest of the PNE squad is that the Championship is a lot tougher and many of them will probably be discarded as new signings are brought in. Beckford has just been released by Bolton Wanderers! Money will talk, but Preston are not a big club and may well depend on loans again to stay up next year.

Finally, I hope there is Sky Sports in heaven as today would have been a great day for PNE's biggest fan in Ireland Joey McKeever who sadly died suddenly a month ago. He lived right across the green from me at Marian Park and he was passionate about PNE. Rest in Peace.

Here are the highlights...