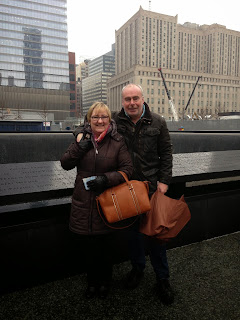 The tragic events of 11th September 2001 will never be forgotten, and New Yorkers are working hard on a fitting memorial to their fellow citizens at the 9/11 Memorial, which is based at the site of the two towers. Both of the fantastic water memorials are based on the foundations of the two towers and they are surrounded by the names of those who died as a result of the 9/11 tragedy. One of things that hits you is the noise of the waterfalls inside the memorials, plus of course the intense security that all visitors have to go through. The museum is not yet open and there is still a lot of construction work going on in the area. We finished up at the museum shop where the highlight is definitely the American Chopper motorcycle (I bought the fridge magnet of it!).

After the 9/11 Memorial we walked down Wall St and paid a quick visit to the National Museum of the American Indian. I was a bit disappointed with this museum as I didn't feel there was that much on show. Soon after we stopped nearby for lunch at the Takahachi Japanese Restaurant in the Tribeca region - light and delicious! After this we made our way uptown to Times Square where we queued for discount tickets (50% off) to see the Jersey Boys on Broadway (the next day I bought the Best of the Four Seasons CD). Later we adjourned to O'Brien's Bar just off Times Square which is run by an old classmate of mine from my CCR days.

The Jersey Boys is an incredible show, and we all enjoyed a great evening's entertainment. I had not realised that Frankie Valli and The Four Seasons had so many hits. My favourite song is December, 1963 (Oh What a Night!). Here's a flavour of the show from the Broadway.com website:

Email ThisBlogThis!Share to TwitterShare to FacebookShare to Pinterest
Labels: Holiday