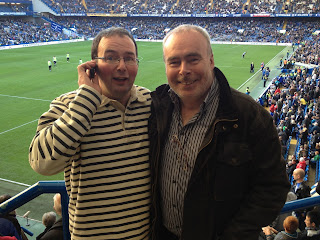 Saturday in London and what better way to spend the afternoon than going to the pub for a few scoops and then going to a football match with my brother Brian and Chris F. Today I went to see only my second ever Premier League game in England - Chelsea against Bolton at Stamford Bridge. Before the game we had a few beers in a local pub called The Pelican. We had been refused entry to another pub closer to the ground because our match tickets were not for "Home" supporters. Nevertheless we enjoyed our beer in The Pelican before heading up to the game.

First half, which ended 0-0, was a bit boring. Not much happening, and the crowd were also quiet. We were with the Bolton fans - awkward for Brian and Chris who are both Chelsea fans. It's impossible not to take sides at a football match and I was impressed by both Brian and Chris's ability to stay quite each time Chelsea scored in an easy 3-0 win. For a day we were Bolton fans - a place I have never been.

Goals by Luiz, Drogba, and Lampard secured Chelsea's win. A highlight for us was seeing Torres coming on for the last 15 minutes or so during which he did very little. Best for Chelsea were Lampard, Essien, and Drogba. Bolton were outclassed and are surely bound for relegation on this form. 40,999 were at the game, which we thoroughly enjoyed.

Email ThisBlogThis!Share to TwitterShare to FacebookShare to Pinterest
Labels: Football