On 13th November 2006 I created this blog with a short My First Post. I posted my second post the day after with a note about my Harley-Davidson motorcycle, but did not post again until four months later on 11th March 2007. In fact during the first year of this blog's existence I only posted FIVE times in total. It was really only in early 2008 that I started to post regularly, with seven posts in February and 124 for the year. These days I can't imagine such a low level of activity. Nowadays I average over 20 posts a month - not quite every day, but fairly regularly nonetheless. I rarely post more than once a day, though I sometimes write more than one post in a day and hold some back to publish on another day.


This is the 717th published post on this blog, and the 234th this year. Simply put - I love blogging! I may even be addicted to blogging - according to this site, I am 80% addicted!

80%How Addicted to Blogging Are You?


Over the past five years I have posted about many things - family, sport, education, politics, travel, holidays, books, films, motorbikes, YouTube, and many more subjects. I don't have a particular theme, and I don't blog as part of my job. In fact I rarely blog during working hours since I was once wrongly accused by a student of writing a blog post instead of answering that student's email during the day. Nowadays during work hours I usually either publish a post that I have previously written, or write about education matters (which is part of my job).

Below are some statistics from Blogger's Stats Overview of my blog which only goes back to going back to May 2009. Currently there is an average of about 100-120 hits per day according to Statcounter.com (as you can see Blogger has a higher count). I am very curious as to why the most popular post of all is my How To... Draw a Polar Diagram in Excel - nearly three times more than the next post. I cannot explain this - perhaps it is search engines that are responsible. I regularly post about videos I have uploaded to YouTube, but this one is low down in YouTube View Counts (4,753 views since December 2008). In fact it is only the 28th most popular video on my Learn with YouTube channel. I have seen it linked to on other sites, but can't explain its popularity. 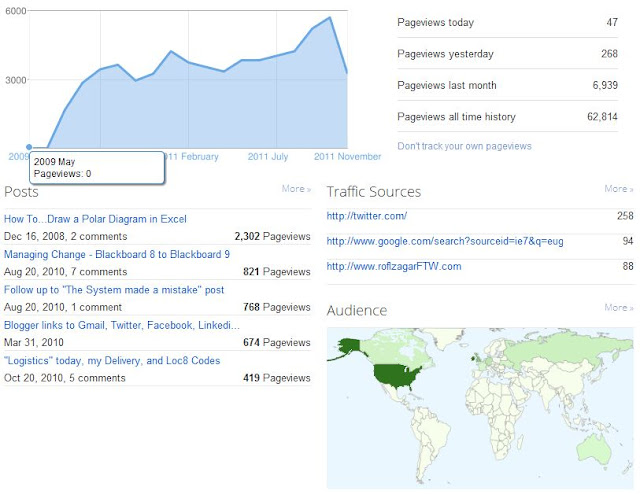 Many of my blog posts, especially from 2008 and 2009, have not been read at all (0 views), or have just a few views. Most traffic sources are from Twitter, Facebook, and Google. Most searches that lead to the blog are searches for variations on my name. Ireland, the United States, and the UK dominate page views by countries. It will be interesting to see in another five years if anything changes!