While on holiday recently I took the bike out on one of the very few nice days to tour South Wexford. It was my first longish ride side since crossing the UK on my return from mainland Europe. While the heat was absent, I enjoyed being back on the bike again. Though I visit Wexford a lot, I am not familiar with the very south of the county. I traveled first down to Wexford town and then across the county towards Hook Head. I also visited the lovely village of Duncannon where I stopped for an ice cream. 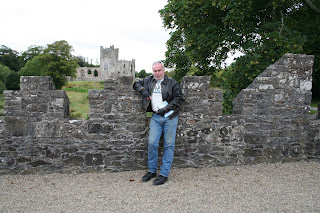 I also stopped to take a look at Tintern Abbey on the shores of Bannow Bay. It has been somewhat restored by the OPW. It is not a very big abbey and doesn't take long to tour. According to Wexford Web "In 1200, William Marshal, Earl of Pembroke, set sail for Ireland on his first visit as Lord of Leinster. Threatened with shipwreck, he vowed to found an abbey wherever he could safely land. On reaching safety in Bannow Bay, he redeemed his vow bequeathing about 9000 acres of land for a Cistercan abbey" - that explains how come an abbey came to be built in such an out of the way place. I checked out the grounds and found it to be a very interesting place - fascinating to think that the building started in 1136 (that's 875 years ago!). Probably the most interesting thing about Tintern Abbey is that it was used in the 1988 Iron Maiden video Can I Play with Madness! Have a look...

The last time I was in south Wexford was for a SCUBA diving trip with the Trinity Sub-Aqua Club in 1986. At that time I was researching the painted topshell Calliostoma zizyphinum (L.). I recorded collecting "39 variegated shells" at Slade Harbour (near Hook Head) on 13th July 1986, and on 14th July "10 variegated shells" at Hook Head. I had a paper published in the Bulletin of the Irish Biogeographical Society documenting this and other collections - here's the reference:


O'Loughlin, E.F.M. (1989). Notes on the distribution of Calliostoma zizyphinum (L.) (Mollusca) on the shores and shallow waters of the Irish coast. Bulletin of the Irish Biogeographical Society. No 12, pp 22-30.

Email ThisBlogThis!Share to TwitterShare to FacebookShare to Pinterest
Labels: Holiday