In today's Irish Times, Charlie Taylor in a report "Education spending trails OECD" writes (citing OECD statistics) that "Ireland remains close to the bottom of the international league table on education spending relative to the country's economic wealth" and that "Ireland invests about 4.7 per cent of its GDP on education compared to an OECD average of 5.7 per cent". Looking at the following chart (taken from the Education at a Glance OECD report), one would be forgiven for thinking that we are lagging badly behind other OECD countries: 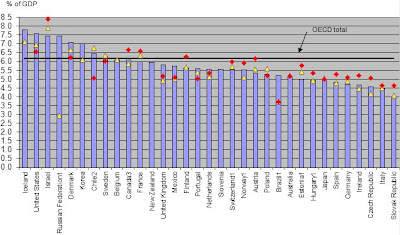 I'm not a statistician, but there are a few things you need to take into account before judging these figures:
The good news is that we have the "seventh-highest graduation rate among industrialised countries, placing it ahead of the UK and the US".
How useful is this report? It's quoting data that is at least three years old, and our GDP has been hit very badly since 2007. In 2007 we were a rich country, now we are a poorer country - no doubt the GDP to Education spending proportion will be different now.
It is interesting to note that the amount spent on education as a proportion of GDP varies widely (7.8% in Iceland - much good it did them, and 3.9% in Slovakia). Surely this is something that all OECD countries could agree on? Of course this will not be possible as long as there are defense budgets (think US vs Iceland) - the amount of money available will vary in each country.
In order for Ireland to spend a higher proportion of GDP more on education, less has to be spent somewhere else (OK - cut politician's expense I hear you say, but that won't be enough). We can't afford to spend more on anything.....