Today is the first day of registration for new students coming to the National College of Ireland. For most, it is their first experience of College - no doubt there will be mixed emotions: excitement, anticipation, meeting new people, bewilderment at the registration process, perhaps even some fear of what lies ahead, or even terror at the prospect of further studies.

As the new academic year starts the thought has struck me about what is was like for me back in October 1978 when I first went to Trinity for registration. I had practically no advice and walked into Trinity on the first day with absolutely no idea about what to expect. I remember being very nervous, a country boy in a big city, and having the feeling that I was the only student in the place who had no idea what was going on. Everybody else seemed to know where they were going, and it looked to me as if they had all made instant friends. 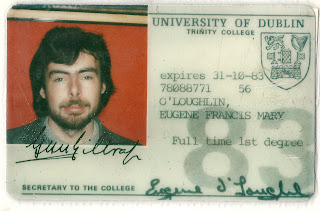