Legends in your Lunchtime 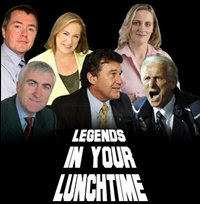 National College of Ireland, Metro Newspaper, and Newstalk Radio have been hosting a series of lunch time conversations with "Leaders" over the past few months - these are then played on Newstalk Radio. Last week I went to the Danuta Gray talk - she is CEO of O2 in Ireland. This week I attended the talk with Maria Mahon, who set up the IrishJobs.ie website. Despite being persuaded to attend by some of my NCI colleagues at the numbers were expected to be low, there were about 80 people there for an interesting talk between Ger Gilroy of Newstalk and Maria. She is certainly a very energetic lady and had some interesting things to say - especially about using the IrishJobs.ie model in other countries such as China. The full converstion can be downloaded from the Newstalk Podcast page or from iTunes.
At the end of the talk there was an opportunity for people in the audience to ask questions and I was first up to ask Maria which leader did she admire most - her answer? Barack Obama. You can hear my question and (part of) her answer by clicking on the play button below: