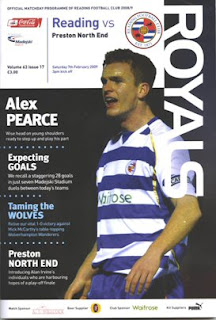 Brian and I went to our first Preston North End away game yesterday to the Madejski Stadium to see Reading take on PNE. Reading were second and PNE sixth in the Championship before the game, so it was an important one for both sides.
I flew over to London Heathrow having arrived at Dublin Airport at 05:45 (at least an hour too early) - the Aircoach service was much faster than expected. In planning my trip, I noted on a UK rail website that I could get a train in Heathrow direct to Reading, but I had to take two trains. The first, to Hayes was only a four minute journey but cost £4.90 (about €5.60)! The next, to Reading, was a more respectable £9.90. Our hotel, the Ibis, was very close to the station and I met Brian there.
After a coffee we headed towards the stadium stopping off on the way at a wonderfully named pub - the World Turned Upside Down! We had a couple of pints and lunch, after which it was time for the match.
The PNE fans were located at the south end of the ground. We sat in the middle, with the boisterous fans behind us. They kept up the singing and chanting throughout the game - "Alan Irvine's Yellow Army", "Yellow Army of the North End", and of course "Your Support is F***ing S**t" to the equally boisterous Reading fans. Good natured stuff that added to the atmosphere - Brian and I were enjoying ourselves, and joined in the singing (when we could figure out what the words were!). There was a lot of yellow balloons about as it was designated as a "Yellow Day" by PNE's CAST (Club And Supporters Together). Though it was a very cold day, one fan behind us had no top on for the entire match - they breed them tough in Lancashire.

The game was great from a PNE point of view - though Reading had many chances, PNE defended really well and gave the fans lots to cheer about. The result, 0-0, was about right - match report here. As Reading had four Irish internationals in their squad (Kevin Doyle, Shane Long, Noel and Stephen Hunt), it added to the interest for us. Ominously for next Wednesday's World Cup qualifier against Georgia, all were rubbish. Today I note that PNE's full back, Eddie Nolan, has been called up to the Irish squad for the same game.

After the game we walked back towards the town centre hoping to get to see Ireland vs France rugby game. We looked in through the window of The Wellington Arms and saw that they were showing the match, so we decided to go in. The pub was very quiet and had a dog which kept sniffing around us - at half time we left and went to O'Neills Irish Bar in the town centre. I was first refused entry because I was wearing a PNE jersey, but was let in after I took it off. The pub was packed and we had to stand to watch the game which Ireland won by 30-21 (report). After this we watched Portsmouth vs Liverpool which had a very exciting second half (Liverpool won 3-2).
For dinner we went to the Raj Indian where we had an excellent meal. Finally, we stopped off for a last pint in The Bugle which was directly across the road from our hotel, before collapsing into bed after a long day.
Today I got up at 07:00 to get a bus to Heathrow - again I was at least an hour too early and had a long wait in the airport. Tired, I finally got home at about 13.00 - Kate kindly picked me up at the bus stop.