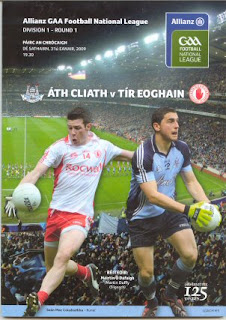 Last evening in Croke Park, the GAA celebrated its 125th anniverary year in front of almost 80,000 people at the opening match of the 2009 National Football League between Dublin and All-Ireland Champions Tyrone. I had given Kate a present of two tickets in her Christmas stocking and she kindly brought me to the match!
We had excellent seats in the front row of the upper Cusack Stand with a perfect view of all the proceedings. While it was cold, we were treated to a great game with a very exciting finish. Tyrone bossed the first half with Stephen O'Neill contributing eight points including one from just under where Kate and I were sitting - as the commentators say, it was "almost from an impossible angle". While Tyrone were running the show, Dublin kept in touch and were only four points down at half time - they could not have complained if it was 10 or 12. At half-time we were treated to some songs, including "Galway Girl" from Mundy and Sharon Shannon.
The second half was completely different, with both teams showing plenty of skill. Two goals really lit up the stadium which lead to the exciting finish. Dublin finally took the lead in injury time only for Tyrone to nick three points in injury time for a just about deserved win by 1-18 to 1-16 (match report). But the show wasn't over yet!

After the game there was a special event to commemorate 125 years of the GAA. First there were clips from past games on the big screen and then the fireworks started. With a backing track provided by Irish groups such as Thin Lizzy and U2 (Larry Mullan Jr. apparently arranged the music) - the fireworks were spectacular. The big ones were outside the ground - presumably on safety grounds, while inside a combined light and (smaller) fireworks show warmed us all up on a cold night. Kate and I loved the occasion - fantastic value for €20 each.
More people attended this game than went to see Manchester United at Old Trafford earlier in the day, or are expected at the Super Bowl Final in Tampa Bay this today. Croke Park probably won't be full again until either Dublin play again or the All-Ireland finals in September.