Book Review - Battles for the Three Kingdoms: The Campaigns for England, Scotland and Ireland - 1689-92 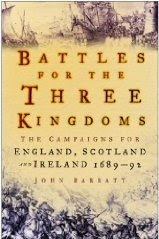 The title of this book - Battles for the Three Kingdoms: The Campaigns for England, Scotland and Ireland - 1689-92, was an attractive one as I always enjoy reading about the War between James II and William III. The book was slightly disappointing - here is the review I wrote at Amazon:

Interesting read about Williamite Wars,
In secondary school history class, the period 1689-1692 was one of my favourites - it had: brave Irish soldiers such as Patrick Sarsfield, gallant French allies, a single cannon ball depriving the Irish victory at the Battle of Aughrim (and General St Ruth his head!), and of course the dastardly anti-Catholic English desperate to put the Irish in their place. All of this is described by John Barratt in this interesting book.

A measure of how good a book is for me is often how long it takes me to read it. I bought this last November and it has taken three months to read. While the book is interesting, it tells us little more than what students of secondary school Irish history will already know about what we in Ireland called "Cogadh an Da Ri" (War of the two Kings). Most of this war was fought in Ireland with the two largest land battles taking place at the Boyne and Aughrim. However, John Barratt does a good job in adding in other events in Scotland and at sea - this gives a more complete picture of what happened during this period.

Overall - the book is a worthwhile read, particularly for those not familiar with the War in Ireland. Barratt's thoughts on the indecision that racked both sides at crucial times, the influence of the French, and the likely outcome of the war in Britain's favour regardless who won the Battle of Aughrim, make for an interesting angle that just about makes the book worth buying.