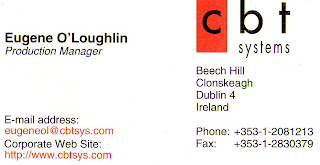 Today, 28th March 2009, marks the 20th anniversary of my first day at work with CBT Systems (which became SmartForce in 1997, and SkillSoft in 2002). I was dressed in a suit with shirt and tie and I took the bus from Llewellyn Park in Rathfarnham where we lived at that time. I still remember the walk down Mount Street to No 39/40 and a very nervous ring of the bell. The receptionist (Olive Bolger) let me in and I was introduced to Ronan Fitzpatrick who would be looking after us for training. He showed us some CBT content and it was the first time I had ever seen some. In my interview for the job I did not know what the letters CBT stood for (Computer Based Training). There were two others starting the same day, including Kate McCarthy who is still with the company. I had a great 13 and a half years leaving with the company, made some money, traveled quite a lot, and took voluntary redundancy in 2002. I still have some of my business cards from my time there - perhaps the best job I did was as Production Manager (as in card above) responsible for getting courses completed on a monthly basis from four production centres. It seems like a lifetime ago when I started - a lot has happened to me in the intervening 20 years.