Today I "took a notion" (as they say in Ballingate) and decided that I would at long last try to go up to Ballycorus Chimney in Rathmichael in south Co Dublin.

For years I have noticed the chimney on top of a hill near Loughlinstown, but had never went near it. I didn't even know that the chimney had a name until earlier today when I Googled it to find directions. It being a fine day, I decided that I would head off with my camera for a look. In Google Maps below it is the shadowed landmark just to the right of center. 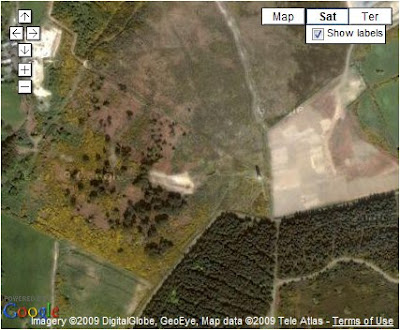 It is easy to drive quite close to the chimney. I parked at the end of a lane and walked the rest of the way up through the nutty aroma of gorze bushes. In no time I was at a very windy top. Once upon a time this chimney was part of a lead mine in this area - lead was mined further down the hill 200 years ago and they decided to build a long chimney to take the fumes from the smelter away. I was once told by a geologist (Pat Kirwan) that it was the longest chimney in Ireland.

The mine was opened about 1805 by the Lead Mining Company of Ireland who erected a smelting works at the foot of Carrickgolligan for processing of lead and silver ores taken from the local mine. Ore was also brought here by horse and cart from Glendalough and other Wicklow mines for processing. The ore was melted and converted into ingots, the silver separated and refined, and litharge, red lead and shot manufactured. The mine was closed during the 1920s. At the top I took a few photographs. The chiminey is still a very impressive structure with an interesting partial spiral staircase around the outside. It is broken in several places so it is no longer possible to go up to the top of the chimney. I was the only person there and I treated myself to the magnificent view out to Bray, Killiney, Dublin Bay, Howth, and the Dublin mountains.
I saw no evidence of the rest of the chimney going down hill - apparently it was possible to walk up through the chimney, but not now.

You can go into the center of the chimney and look up through the middle.

One is struck by the ingenuity of the 19th century engineers who built this chimney. Nearby there is a hollowed out area where it looks like the stones for the chimney were cut out of the local granite rock. I'm glad that at last I made the effort to go and see this landmark.