While attending a Data Analytics Institute Inspire on-line event this morning, I was particularly interested about a very old data set in the form of a Life Table. One of the presenters used this as part of the introduction. In 1693 Edmond Halley, he of Halley's Comet fame, created a life (population) table. It was based on data collected for the years 1687 - 1691 from the city of Breslau, which is now called Wrocław in Poland. The data that Halley used were the numbers of births and deaths recorded in the parish registers of the town. He was interested in debunking some superstitions about multiples of 7 - apparently people feared reaching the age of 63 (9 x 7) as it was thought to be an age at which you were more likely to die. Wow - this is from 1693, Data Science was in its infancy! In 2011, David Bellhouse wrote a paper taking "A new look at Halley’s life table", which explains among other things how Halley used to round numbers and that the original data set is no longer available. You can see that every age from 1 to 84 is listed, and that they are presented in groups of seven. For R programmers, this dataset is available in the "HistData" library - here's the code to load the data and plot "Age" against "Persons Surviving" in stair steps format, and a plot showing the probability of surviving one more year:

The code above generates the following two charts: 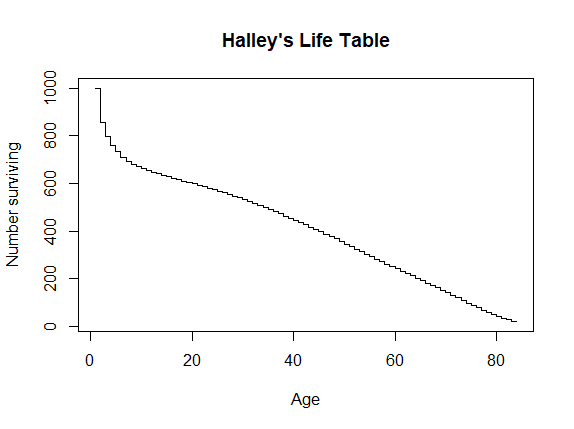 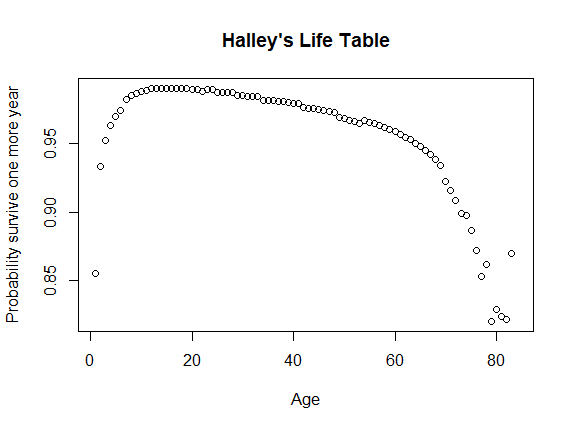 Nice to be able to examine a dataset that is 327 years old!

Halley, E. (1693) An estimate of the degrees of mortality of mankind, drawn from the curious tables of births and funerals in the City of Breslaw; with an attempt to ascertain the price of annuities upon lives. Phil. Trans., 17, 596–610.