Are selfies taken at the Berlin Holocaust Memorial disrespectful to the millions of people murdered during World War II? The yolocaust.de website has recently provoked a strong reaction, both positive and negative, to people taking selfies at the memorial.  The Memorial to the Murdered Jews of Europe consists of 2,711 concrete slabs called stelae, and is easily the most sombre place I have ever been when visiting Berlin last September. Yes - while I was there there were many people taking selfies (including me), and jumping from one slab to the next (not including me). There were young and old mostly just walking along the many passes and corridors between the slabs. I also visiting the underground museum - numbing.

I was born just 14 years after the end of World War II in safe Catholic Ireland on the edge of Europe far away from the atrocities committed in the name of National Socialism. Thankfully none of our Jewish community, LGBT community, or people with Mental Disability went to the gas chambers. I don't even know if there is a holocaust memorial in Ireland - we were far removed from these awful events. However, speaking in 2012, Alan Shatter (the then Minister for Justice) said that an "inconvenient truth is that those who chose to do and say nothing during this unprecedented period in European history included this State [Ireland]" and he recalled that the Irish Ambassador to Germany recommended that the Irish Government refuse visa requests from Jews to protect Ireland from "contamination". What a load of bollocks that thankfully should not happen now.

In the photo below (taken by Roma), we certainly meant no disrespect to anyone - this is just one of probably thousands of photos taken that day at the Memorial. Young people in particular, who are now several generations away from WWII and used to selfies everywhere, might find the fuss over yolocaust to be both awkward and bemusing. To small children, this place is like a playground. In a hundred years time when most of us will all be dead - what will people think of the Memorial to the Murdered Jews of Europe? Hopefully it will retain its sombreness and that there will be no need to build any more similar memorials between now and then. 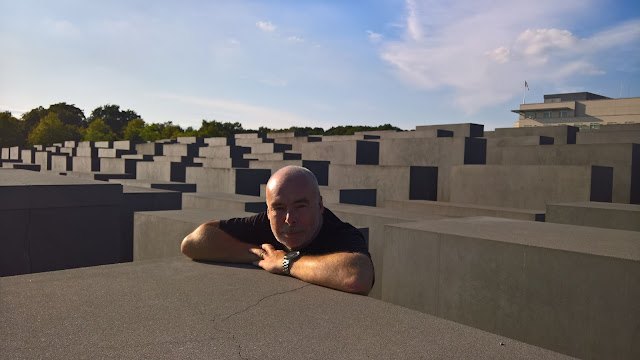