The Gathering of Irish Learning Technologists at #EdTech13, Day 1

University College Cork was the venue for this year's  two-day EdTech Conference hosted by the Irish Learning Technology Association. This is the annual meeting of folks involved in learning and teaching who are passionate about using technology of all sorts to enhance education.

The organizers of EdTech 2013 kindly fixed for fine weather and I had a glorious blue sky all the way from Dublin to Cork on my Harley-Davidson. I arrived late for the fist keynote by Catherine Cronin of NUI Galway, but I still heard her talk about open education and student voices (I also discovered later in the conference that Catherine is a 1959 baby-boomer like me!). Later, ILTA Chairman Paul Gormley gave us some interesting preliminary results from the 2013 Technology-Enhanced Learning Survey. One of the most interesting was the result that "44 students" out of 5,500 surveyed don't use Facebook.

I was presenting during the first of the breakout sessions - the title of my talk was "Anatomy of Two and a Half Million YouTube Learners: Who's Watching and What are they Learning". I got a good crowd who were interested in the learning analytics from my YouTube channel. With hindsight I tried to show too much in the 15 minutes available and I was very rushed. I judged that I could run through the analytics live from YouTube, but I would have been better off taking a small selection of data and presenting that instead of trying to squeeze in too much.


Next up was a talk about a blended learning pathway for the credit unions run by Bridget Carroll and Olive McCarthy of UCC. This was a real blend of everything - they even produced a manual that they use! The last talk in this session was by Enda Donnellan of Mater Dei Institute of Education. I had never met Enda, but feel as if I know as I follow him (@donenda) on Twitter - it was nice to meet face-to-face. He told us about a very successful tool, called METIS, for managing student teachers at Mater Dei. The nature of breakout sessions where there were four parallel talks is that you miss everything in the other sessions. There were talks on MOOCs, Moodle, Digital Literacies, and using tablet computers that I would have liked to have attended.


After lunch I attended two more very interesting talks. The first was from Dan Coakley and Martin Howley who gave us the story of using a building for learning, ie the new engineering block in NUIG. They found that Thermodynamics and Heating was the toughest module for engineering students, so they use a Predicted Mean Vote method among students to answer the question "How comfortable is a space?". This was followed by my colleague from NCI, Leo Casey, who entertained and informed us about the diffusion of innovations, and how this can help us understand how and why innovations in education are so important.

The afternoon keynote was presented by Sian Bayne of the University of Edinburgh - she gave us the low-down on MOOCs she and her colleagues developed via Coursera. 309,628 students registered for the  MOOC, a respectful 29% "completed". Great presentation which included some samples of videos created by students of the MOOC. The day ended with the Jennifer Burke Award for Innovation in Learning and Teaching. I was a finalist in this competition two years ago, so I know how nervous the finalists this year must have felt. 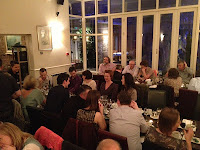 In the evening we adjourned to the Shelbourne Bar in MacCurtain Street for a nice pint, followed by dinner in Greene's Restaurant across the road. Great as always to meet both the familiar faces and some new folks too. An excellent meal and excellent conversation to round off a great day of learning.

I stayed in Jury's Inn, very comfortable and convenient. Just a mention to say thanks for letting me park my bike safely in the small hotel car park.

Email ThisBlogThis!Share to TwitterShare to FacebookShare to Pinterest
Labels: EdTech