Sunday in Rome, only one thing to do in the morning and that is attend Mass. Our hotel (The Artimide on Via Nazionale) is close to the Santa Maria Maggiore church and off we went in search of some spirituality in the home of the Catholic Church. Mass had already started when we got there, this was just as well because everything was in Italian. This basilica is beautifully decorated in Byzantine style according to the guide books. It was quite busy and there were several priests on the altar backed up by a brilliant male voice choir who sang beautifully. 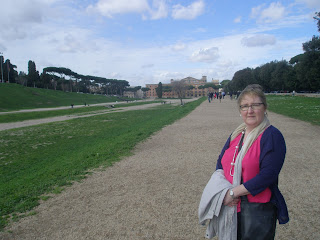 After Mass we wandered down towards the Colosseum again for another look - still awesome! This time we walked all around the site from the outside and made our way down to the nearby Circo Massimo which is now little more than a park, it was once a chariot racing and sports arena during the Roman Empire period (think of the Ben Hur movie). We continued past the Circo Massimo and checked out a local food market where there was delicious looking fresh food on display - a pity we were heading home later in the day.


We stopped at the In Roma café for a beer across from which is the site of the Tarpeian Rock (behind me in photo below) where the Romans executed criminals and traitors by throwing them off the rock. Rome was indeed a bloodthirsty place 2,000 years ago. 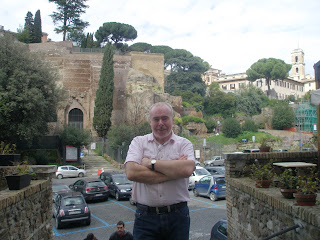 For a short while we separated - Roma did some shopping while I toured around a few more sites. At the Piazza del Quirinalle the President of Italy's palace is located. This was once the home of Popes and Italian kings. There were a lot of policemen and armed guards patrolling outside the building - this was a feature of a lot of Italian places where there seemed to be a lot of police. In one location I spotted eight policemen standing around together having a chat.

Back together we finished off our stay in Rome with one last delicious pizza near our hotel. We very much enjoyed our stay in Rome and vowed to return some day for a longer stay. It was a pity that we were not in Rome during the election of the new Pope, I'm sure St Peter's Square would have been quite the place to be for the "Habemus Papam" moment.

Email ThisBlogThis!Share to TwitterShare to FacebookShare to Pinterest
Labels: Travel