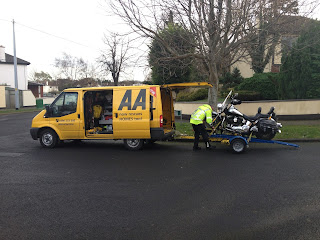 The trouble with Harleys is that they break down, as do all other motorcycles. And when they do they are expensive to repair. Last week while putting my bike into the shed I felt the clutch cable snap, or at least I thought I did. I have insurance with HOG Assistance, so I called them up on Friday morning - TWO HOURS later I finally got the AA to collect the bike after HOG failed to help me and I got the AA to sort me out. They have a clever system where they have a bike trailer in the back of the van that folds out like you see in the photo. The very helpful Mick of the AA brought me and the bike to Motorcycle City in Blessington Street. 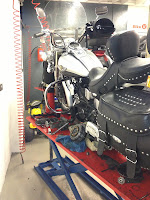 What at first appeared to be a simple case of replacing the clutch cable has now turned into a massive repair job. First, I had never seen the inside of the left side of the bike's gearbox. In the photo to the right the bike is on a its hospital bed. I got a great detailed explanation as to what caused the "snap" I felt. It had nothing to do with the clutch cable. It is connected to a clutch shaft on the right side of the bike. This shaft goes through to the other side where the problem was located. In the photo below the finger is pointing to the end of the shaft, just below this is the nut that has broken off the end piece of the shaft.

The clutch shaft has to be replaced, and unfortunately all the bearings and clips attached to it also have to be replaced too. It is a major mechanical operation where the bike has to be taken apart. I don't have a price yet, but I am worried about how much this is going to cost - labour alone will run to a few hundred euro. Only last month the starter clutch was replaced. For the first time I've wondered whether I should keep this bike at all - but ten seconds later I stopped wondering this. 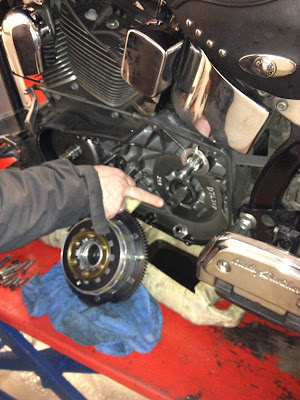 Email ThisBlogThis!Share to TwitterShare to FacebookShare to Pinterest
Labels: Harley-Davidson