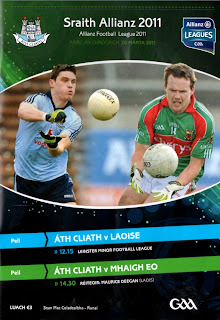 Croke Park in the sun - - Spring must be here! A small crowd of 18,000 saw an extraordinary football game. What was most extraordinary was that Roma, a Mayo native of course, came along to her first ever football game. Some women think that all football games are the same - but there's nothing like being at a game like this.

Horslips were playing before the match - I could hear "Dearg Doom" from outside the ground on my way in. Alas - they were finished by the time we got inside (see them on YouTube instead!).

Dublin raced into a 14-point lead in the first half - it looked like Barcelona playing a pub team. Everything Dublin tried worked - including a super first-half hat-trick by Diarmuid Connolly (who will never have it so easy again). While Mayo came back into the game a bit - there was still an 8-point difference at half time. Dublin 4-8, Mayo 1-9. Five goals and lots to cheer about. Roma wasn't too impressed with her team - it was looking very bad for Mayo.

The second half changed everything - with an incredible Mayo come-back from the 8-point deficit to level the scores after 10 minutes of the second half. Even Roma jumped out of her seat to celebrate Mayo's third goal - addictive or what! Dublin pulled away to win by five points, but Mayo can take a lot of credit from their second half performance - it is not often that a team who scores 3-13 in a match loses.

As for Dublin - this is five wins in a row in the League. However, they are not good at defence and are shipping a lot of scores. Once teams figure out how to keep their on-fire forwards in check, they will have a tougher time winning games. But on this form they can look forward to a long summer in the Championship ahead. All the way to the All-Ireland Final?

As for Roma's verdict? Her grand uncle Eamon Mongey (see a tribute to him at the Hoganstand.com website), was a key member of the Mayo All-Ireland winning teams of 1950 and 1951 - so there is GAA in the blood. She enjoyed her first game and hopes to be back to cheer on Mayo in the All-Ireland final in September!