I have noticed that the rhetoric used in the media recently has stepped up a notch with words like "patriotism", "traitors", and "treason" being bandied about. Sensationalist headlines add to the fervour of this type of angry rhetoric.

First - some definitions (all from Dictionary.com)...

...some easy to understand definitions I think you'll agree.

Paddy Woodworth in the Examiner newspaper of 1st October last writes: "Suck it up and shut up is the message to the taxpayer" in which he states: "I WONDER if you feel as sick as I do? And as scared? And as helpless? I would like to add "and as angry?" but I have just learned that I must not give any more space to that unpatriotic emotion". Woodworth's article is well worth a read - it is calm anger at its best. As he puts it - there's nothing wrong with being angry at what has happened to our wonderful country, and it is not being unpatriotic to suggest so. Hell - I am angry along with everyone else.
The Irish Daily Star in a headline last March, thinks that some people should be shot! If I'm not mistaken - they also had a headline with "Traitors" on it recently, I searched the web for a copy of this but could not find it. Strong stuff from the Star. To suggest that they are traitors is a bit far fetched according to the definitions above, to suggest that they should be shot is equally far fetched. I know anger is an extreme emotion, but I also know that decisions should not be made when you are angry - better to decide in the cold calculated non-angry aftermath. We should also remember that revenge is not satisfactory - we might feel better for a while, but not for long. How would we feel as a Nation if the news tomorrow morning reported that Fitzpatrick and Fingleton had just been executed at dawn in Kilmainham Jail - not good for a society that traditionally shuns capital punishment. Yet it is a fabric of our current situation that rags such as the Daily Star spout this nonsense in an effort to make people feel better (and of course to sell more papers). Shame on them for spouting this shite.
Finally, the Irish Times had a recent poll - Does the Government have a mandate to introduce a four year budgetary plan? Someone called "Maggie" responds (and gets up my goat):
No it doesn't. It doesn't have a mandate to do anything. But watch what will happen - if/when an election is called the auld boyos will still be voting for the FFers. I think it's time to make being a supporter of FF a treasonable offence. 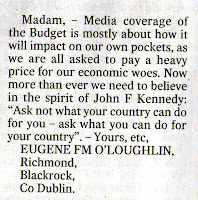 Strong stuff also I think you'll agree. Well my message to "Maggie" is "fuck you" for calling me a traitor. I love my country and do not seek to harm or kill anyone. I have voted #1 for Mary Hanafin of Fianna Fáil - an honest, able, and good politician in my view, in recent general elections. I will continue to vote for her - and I (and no doubt a few more thousand Dún Laoghaire voters) will also support her and her party. I do not see better or more able candidates in our constituency. "Traitors" we certainly are not. You are of course entitled to your (stupid) opinion, but fuck you again.
The value of patriotism is not just a love for our country - but the deeds we make on our country's behalf. John F. Kennedy puts it nicely as I suggest in my published letter to The Irish Times of 13th April last. It is what we do rather than what we think as a nation that counts. As a society, we are descending to the gutter if we think that hanging or shooting a few bad guys will cure all our ills. We need to be more mature than that - alas, maturity is in short supply at the moment.
So my message to the media (who will certainly not listen), and to the "Maggies" of this world is this: think before you publish your vile shite - some of us "auld boyos" get on with our jobs, pay tax, do not preach treason, and are not traitors. We are above all this - let's behave accordingly.
Apologies for the bad language in this post - but it is possible to use bad language and still be patriotic. According to the definitions above, I am a patriot, am not a traitor, and have not committed treason.
We should reclaim "Éireann go Brágh", and believe it.