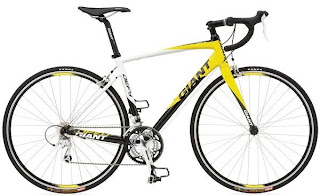 On Friday I picked up a new bicycle from Ferris Wheels in Booterstown - it is a Giant Defy (picture right copied from the Giant website). I purchased it using the Cycle To Work scheme, which allows employees in an organization to buy a bike tax free. For every two euro I have to spend, I have to earn three - so I am saving approximately one third of the cost of the bike. I am paying for the bike by having the cost deducted from my salary over 12 months. This is a cool scheme - several of my colleagues at work have also availed of it.

Despite being unable to figure out how to change down in the gears at first - I like the new bike already. It is really light and fast - my first trip home from work took five minute less than normal. I really disliked my old hybrid bike (also a Giant) from the moment I bought it. It was very low geared, heavy, and slow. I look forward to an environmentally friendly, healthy, and fast commute from now on (I'll still use the Harley though!).