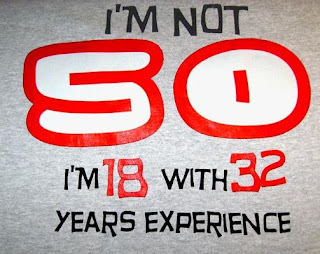 The Los Angeles Times reported last Monday that "Stress and worry ebb, happiness grows after 50" following a study by American researchers (see Abstract of study here). The study, conducted in a survey of 355,344 Americans aged from 18 to 84, showed that after about 50, stress levels took a deep plunge, and a general Well Being index increased "after the age of 50 years".

Now that I am 50, I pay attention to these facts. The above was also reported on RTÉ Radio 1 News this morning - so I began the day with a slight spring in my step. At least it is easier to listen to than those new ads featuring Micheál Ó Muircheartaigh and Olivia O'Leary about being "veterans" as they are over 50! (Don't mention the "lust for life" ads either!)

The study also shows that anger "burned hottest at 18-21", stayed high until the 40s, and then declined. At age 18-21 I was a student in Trinity, but didn't really get angry about much. I do recall storming the Dining Hall during Commons (with Jim O'C and about 20 others) and drank some of the Guinness that was traditionally served with dinner. I think it was over the suspension/expulsion of Joe Duffy (of RTÉ fame), but I'm not sure - it probably felt important at the time. I also remember in 1981 (when I was 21) that I signed a book of condolence outside the GPO for the Hunger Striker Thomas McElwee (the ninth of the ten hunger strikers to die - he died on 8th August) - I was angry about that.

I don't know that now that I have turned 50 if my life will be less stressed. I thank God for the many blessings that I have and the fact that my life is relatively unstressed. Sure - I do have worries like everyone else, but they pale into insignificance when compared to others. I know many who have health difficulties, great financial burdens, family problems, job insecurity - and I know that my own situation could change in a flash.

However, being 50, I do think that I could handle stress a bit better. I'm not quite in the "I've seen it all before" category, but this is the second Recession I have been through. I have also been through three redundancy situations (I survived the first two, but took voluntary redundancy in the third). I don't "lose the rag" if I hit a bad shot in golf, and I don't need to overtake every car on the road (my family tell me that I think I don't need to overtake any car on the road!). Almost everyday that I commute to and from work I silently tell other people on the road to "chillax", and that other people's trivial bad road habits are nothing to get worked up over. Remember - you don't own that space on the road in front of you.

As the demographic of Ireland's (and the world's) population is getting older - expect to see more of these lifestyle surveys. A new study, "The Irish LongituDinal Study on Ageing (TILDA)" is being carried out by Trinity College (in collaboration with other Institutions). This new study "explores the health, lifestyles and financial situation of 8,000 to 10,000 people as they grow older, and observes how their circumstances change over a 10 year period" of the over 50s. I hope they pick me!