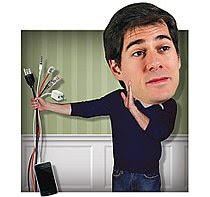 Courtesy of my colleague Neal, who gave me a paper copy of an article by Joel Stein in TIME Magazine, March 19th last was a National day of Unplugging in the U.S. I missed this event - I don't think it was publicized over here. Stein participated in an "Unplug Challenge," going "off the grid" for 24 hours last weekend. He got lost on the way to a party because he had turned off his GPS; missed his friends because he had gotten lost and couldn't text to let them know; and drove really fast to fill in the void of the radio. But he still found the notion of being unplugged addicting. (above taken from an article by Tanya Schevitz of the Huffington Post).

Stein (who is a self confessed attention seeker) at first found being "Off the Grid" difficult - he and his wife lasted 11 minutes, but eventually he got into the idea and even added on a second 24 hours. I loved his comment that he would never write anything longer than my name with a pen.
It's 9.20 am as I write this (must get to work) and already I have checked my Gmail and TweetDeck before breakfast on my iPhone, checked my NCI email, re-tweeted the Stein article on Twitter, and posted this item on my blog.  (I've just realized that Twitterfeed will also post a link to this post on Twitter - I must remember not to double up).
Stein has got me thinking - how long would I last without technology? I am addicted to my iPhone and my computer, and would feel a kind of "virtual impotence" without technology. Almost like Stein's feelings about lighting even one candle (read the article to see what I mean).
Graphic above is an illustration by John Ueland for TIME and is taken from the TIME article above.