"Philadelphia Here I" come at the Gaiety 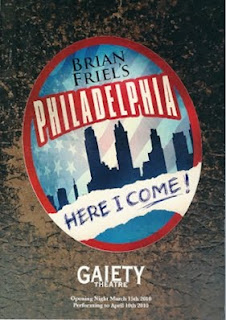 I went to see the Brian Friel play "Philadelphia Here I Come" at the Gaiety Theatre last evening - I had never seen it before. Written in the early 1960's it is about a young man (Gar) about to emigrate to Philadelphia. The intriguing part about the play is that Gar's alter ego is also a character - both parts were given fantastic treatment by Ciarán O'Brien (Gar Public) and Tom Vaughan-Lawlor (Gar Private). The dialog and action featuring these two was never tiresome, and was a joy to watch. A potentially complicated play was made very simple, and was excellently produced. Barry McGovern as S.B. O'Donnell was the star of the show for me. He played the part of Gar's father to a tee - I saw lots of men like him when I was growing up. Not many lines for McGovern to say, but he was perfection.

It's quite a long play (2 hours and 20 minutes). The Intermission was short and incredibly there were only two people serving at the bar. By the time it was my turn to be served a third bar-person arrived (why does this always happen to me?). Roma and I enjoyed a nice glass of red wine each.

We adjourned to the Bleu Bistro on Dawson Street afterwards for dinner - this was my first time here as well (I had made several efforts to go there in the past). While the restaurant was very noisy (due to a large party), I had a most wonderful meal. For main course I had "Crisp Duck Confit, Carrot & Star Anise Puree, Potato Rosti, Hazelnuts & Orange" (from their menu). This was simply superb - I took the unusual step of calling over the waiter just to tell how much I was enjoying the meal. I asked for (and got) an extra portion of Puree. If you like crispy duck you have to try this - fantastic stuff.