Look what a Parking Payment Machine can do! 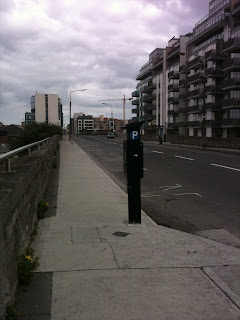 While out for a walk at lunch today I came across an almost empty Upper Sheriff Street - I took the photo from outside the door of the Docklands Train Station facing east at 1.50pm.

Normally on this wide street every parking space would have been taken from an early hour. But recently, Dublin City Council obviously decided that they were having none of this free parking lark and that folks would have to pay for the privilege of parking on Sheriff Street. A two-hour limit is imposed in an area with almost no shops, amenities, or facilities. Who would be stopping here for less than two hours?
As you can see, this cunning plan to generate more revenue is not working. Lunchtime in the middle of the day should be the busiest time, but there is only ONE car parked in the whole street.
How much did the marking of the lines, new sign-posts, and the parking machines cost? Not to mention the contract for the deadly Clampers! What genius in the Council decided to do this? Did they do a cost-benefit analysis? Today this street is making only a few cent for the Council (assuming the car owner above paid their fee). How long will it take this street to pay for itself (Payback)? Are people in the Council accountable for generating an ROI? How do they decide if a street will pay for itself, or even make a profit? Surely this is costing much more that it makes?
Grown up people in the Council made the decision to charge for parking here, but all they've done is empty the street. It would be an interesting research project to do to find out where all the cars are now parked. There are so few streets in this area now where you can park for free all day. It's clearly Council policy that there should be no free parking, and they'll spend whatever it takes to enforce this. But all they are doing is emptying the streets - and still getting virtually no revenue.
Me - I think it is just mean and stupid.