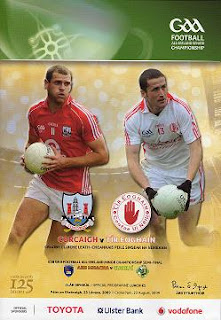 Yesterday Kate and I went along to the All-Ireland Senior Football Semi-final between Cork and champions Tyrone. We had seats high up in the Cusack Stand, but they were very central and we had an excellent view of the football. On account of my ancestors (on my Dad's side) we were up for Cork.
Cork certainly started very well racing into an early lead that Tyrone could never pull back. Amid shouts from the crowd of "Rebels, Rebels", Cork put on a display that will make them favourites for the All-Ireland final - even if they are facing Kerry. The Cork defence was super, they snuffed out almost everything that Tyrone had to offer - they even had a player (Alan O'Connor) unfairly sent off, but they overcame that too. Everyone in the crowd was expecting Tyrone to up their game at any time as they have been doing for the past couple of years - but it did not happen.
Best team won!