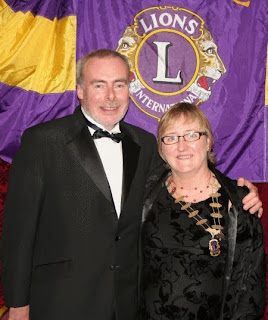 As President of the Killiney Lions Club (of which I am not a member), Roma get invited to Annual Dinners of other Lions Clubs. Killiney is twinned with the Holyhead Lions Club in Wales. We set off on the 11.30 ferry from Dún Laoghaire to Holyhead and were picked up by Lion colleagues of Roma, David and Jim - there were seven people associated with Killiney Lions attending. We decided not to take the car as it is very expensive and we didn't really need it.

The Hotel where we were staying, and where the dinner was, is the Valley Hotel in the village of Valley, on the Isle if Anglesey. It is a small hotel, nothing fancy. We had lunch on arrival, and as it was raining heavily we stayed in the hotel for the afternoon.

Dinner was a black tie affair, and was full of Lions ceremoney. Holyhead Lions only recently voted to allow women members, and some of the speeches bordered on sexist (they have no women members yet). We were sitting beside a couple from the West of Ireland who had emigrated to Britain in the 1950s - so we had some interesting chat about that. I'm guessing that I was either the third or fourth youngest person there, Roma was one of the people younger than me. After dinner there was some music and dancing and the night finished up before 12. I had an interesting evening with a Rev James - not a vicar/priest, but a beer by Welsh brewing company Brains!

Before our return home to Dún Laoghaire we were invited to lunch in Holyhead Golf Club in Treardur Bay by the Holyhead Lions. It was pleasant sunny day and we had a nice walk along the Bay first.

Kate picked us up from the ferry in Dún Laoghaire - very handy having a daughter who can drive my car. Overall, an good weekend. However, most of the Lions we were with are in their 60s and 70s - they seem to all want to "look after" the younger people. They were constantly asking if we were OK - as if they were our parents. I had enough of this, and was glad to be home.