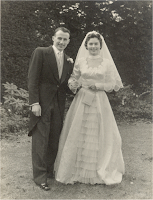 Yesterday was a great day for our family when Mum (Phil) and Dad (Joe) celebrated their Golden Wedding Anniversary - they were married in Ballybrack Church on 22nd October, 1958. Dad's uncle, Monsignor Charles Hurley was the mass celebrant.
50 years later they spent the day together. First, they went to Mass in Tomacork Church. I called them to wish a "Happy Anniversary" and they were in great form. Later they went to lunch in Lawless's Hotel in Aughrim. They had several callers and well wishers on the day.
We are partying on Saturday night in the Amber Springs Hotel in Gorey - all the family, neighbours, and friends will be there. A good night is in prospect.
Congratulations Mum and Dad!!!
Your loving son,
Eugene