Book Launch - "The State of the Unions" 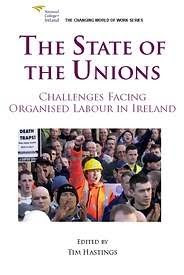 I attended a book launch at the National College of Ireland last evening. The book is entitled The State of the Unions, and it is edited by Dr Tim Hastings, a colleague from the Associate Faculty at the College. It is the second book in the series of books published by NCI and Liffey Press - the series is called The Changing World of Work. The book launch is mentioned in today's Irish Times.

The book launch was opened by Dr Paul Mooney, President of the College. Dr Hastings also spoke about putting the book together - it is a series of chapters by leading labour movement figures in Ireland, including Ruarí Quinn (former Minister for Labour), Dr Brendan McPartlin (a former lecturing colleague in NCI), and Davig Begg (General Scretary of the Irish Congress of Trade Unions - ICTU).

I don't have much time for unions. I am one of the few members of academic staff in NCI who are not in a union - and have no intention or desire to join SIPTU, the union most staff in the College are members of. However, the highlight of the evening was hearing and meeting Jack O'Connor, President of SIPTU, who formally launched the book. He de-bunked the myth that union membership is falling, and claimed that unions are now more relevant than ever before to stand up for workers who have to work for somebody else. I have to say he is an inspiring speaker - I had also heard him on RTÉ radio in the morning calling the new one percent employment levy in the Budget as a crude instrument that disregards the principle of ability to pay and will inflict further hardship on those on middle to lower incomes.

I bought a copy of the book and had both Tim and Jack sign it. I will give the book to my Mum's cousin Brendan Byrne who is a retired SIPTU official. I had invited him to the launch, but he didn't make it. I don't think I'll read it myself.