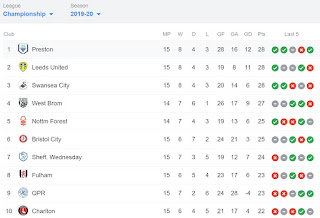 Something for Preston North End fans (like me) all over the world to cheer today - we are top of the league! A great away win over Charlton Athletic meant that PNE are on top of the Championship for the first time in many, many years. We don't get to celebrate too much, but this season's team under Alex Neil has been consistent in grinding out results. Incredibly, for a team that traditionally does not score a lot of goals, PNE are also top scorers with 28 goals in the Championship. The top of the Championship is very tight, with just three points separating the top six - but our moment of glory is ours to savour.

Preston have always had a tradition of featuring Irish players - in the team today were Alan Browne and Seán Maguire. Long may they keep PNE at the top!