"Eugene O'Loughlin, your content violated YouTube's Community Guidelines and has been removed" 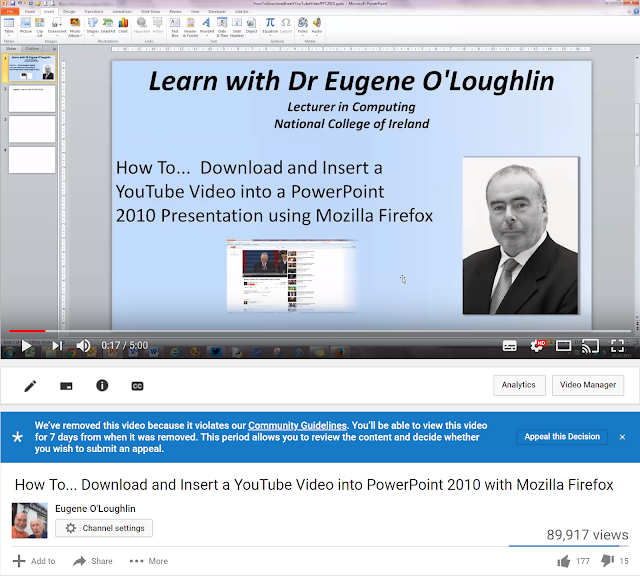 I think I can guess that they don't want anyone downloading videos, or perhaps the example video I used on President Obama's Inauguration was in breach of copyright. I published this video on 23rd October, 2013 - so it has taken nearly six years for YouTube to rap me on the knuckles. In this time, the video has amassed 89,918 views, 177 Likes, and 15 Dislikes. Further analytics are not now available, and I have 7 days to appeal this "decision" - no doubt made be an algorithm, not a person (or a "team"), before it disappears completely.

I will not be appealing this decision, even though you can still use Mozilla Firefox (with the Easy Youtube Video Downloader Express add-on) to download videos from YouTube. The screen shots I used six years ago are now dated, as is the choice of PowerPoint 2010. It feels funny to have a video like this classified as "harmful and dangerous", and I am sure I am joining thousands of other content developers having videos removed.

What does concern me is if this is the start of something new. By using screenshots from the likes of Microsoft PowerPoint - am I breaching copyright rules? Or am I just being "harmful and dangerous"? I'm also concerned that this may affect the search/recommendation algorithms for my other videos - will a bad boy get less? I'll be watching out for evidence of this over the next few weeks.

I hope that lots of the 89,917 views were useful for the folks that watched, and that many were able to show videos in their presentations. For a couple of years now it has not been possible to embed YouTube videos in a PowerPoint presentation - so my video was a handy workaround.

A final BIG THANK YOU to all my viewers for watching this video!