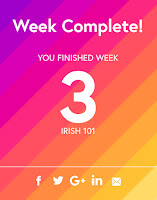 FutureLearn, part of DCU, are in the process of creating basic Irish language courses aimed at people from other countries who want to learn a bit about Ireland as well as pick up the cúpla focal. Their first course: Irish 101: An Introduction to Irish Language and Culture, is now finished. I took this course out of curiosity as well as a personal journey to re-visit the Irish language. I even managed to complete it! I am now enrolled in Irish 102: An Introduction to Irish Language and Culture which starts on 26th March next. Both are short courses with a suggested four hours a week study.

The experience of learning Irish again was a mixed one for me. I'm not proud of the fact that I cannot hold even a modest conversation in Irish. From 1964 to 1977, I probably had Irish classes every school day. I even attended 6th class in an all Irish school in Trabolgan (Co Cork) from September 1971 to May 1972. I wasn't particularly good at speaking Irish, but I was awarded a Fáinne Nua at the end of this school year (I think every student got one!). I scored a D in honours Irish in the Intermediate (Junior) Certificate exam, while I got a C in ordinary level Irish in the Leaving Certificate. Since 1977 I have almost never had the need to have a conversation in Irish. Despite this, I was surprised at how familiar the Irish covered in the first course was to me. It has to be said that there was a lot of Dia dhiut and  Is maith liom in it - basic stuff. Quite a bit of grammar was covered (which I had totally forgotten), which was a bit boring. There was a good mix of animation, video, text, and quizzes - well done to the Future Learn e-Learning team for developing content that holds student interest well.

I'm looking forward to Irish 102 where among the topics we will be learning how to discuss the weather, and tell the time in Irish. Anyone interested in taking the course can enrol here. Bígí linn – join us!