The National Craft Fair must have been the busiest place in Dublin this weekend. Lots of brilliant arts, crafts, and food on display. Lots of people there too - I guess going at 2.00pm on a Sunday afternoon was asking for it to be crowded. We bought some stuff for Christmas pressies, and judging by the number of bags being carried around - so did a lot of other people.

After a while it felt a bit like Groundhog Day - there were so many jewelry and ceramics stands in each aisle. There were artists from all over the country who hopefully had a good day and made some money now that the Recession is over and everyone in Ireland is rich again. There were so many beautiful ceramics that I would love to have, but there were far too many in the RDS to make a purchase simple. In the end we bought one pressie and I bought a ceramic fish!

In the Food Hall there was lots of oils, sweets, cheeses, and crisps (I loved the "Happy Crispmas" jumpers!). I had a taste of cider at the Armagh Cider Company stand, but was surprised to learn that I could not buy a bottle or two because the RDS forbids this since they want the punters to buy from their own many food and drinks stands. I also found the €10 entry fee a bit much - where else are you charged to go into a market. This time last year I went to the fantastic St George's Market in Belfast - no entry fee there even though many of the artists show their wares at both markets. With thousands of people attending the Fair, the RDS creams it from entry fees, from concession stands, and probably for charging each of the artists for their stands. Overall - an interesting day spent in the midst of a lot of talented artists! 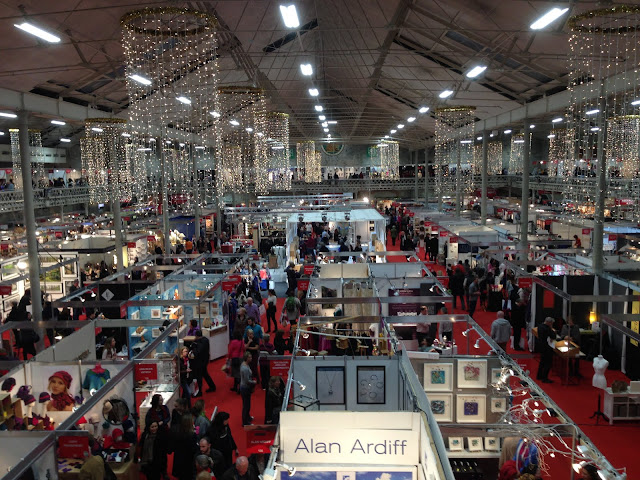