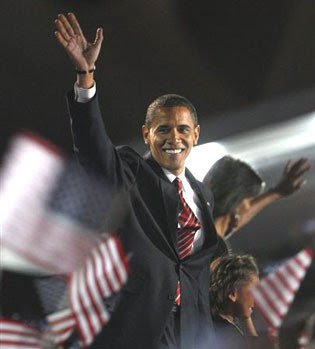 I'm delighted with this morning's news that Barack Obama has won the US Presidential Election. I stayed up until about 3.00 am and followed the early results. At the early stages it was actually looking good for McCain -  but it was fascinating to watch the counts coming in and the results of each state being projected. The photo to the right is of a victorious Obama from the today's Irish Times website - too late for print version.
I mostly watched CNN, and once they had projected that Obama would win Ohio, and that he was was ahead in Florida - it was all over bar the shouting.  Time to go to bed.
I rarely stay up this late - especially to watch TV, but I was hooked and didn't feel tired. I would have liked to have been in Grant Park in Chicago where CNN kept showing us the crowds that were gathering early on for Obama's victory speech - this looked like a great party and a historic place to be last night. McCain had Waylon Jennings Jnr playing at his "victory" location - no wonder he lost.
Sadly for McCain, he will be forever remembered as a loser. His place in history as a maverick senator and war hero is assured, but who remembers Kerrey, Gore, Dole, Mondale and many others as anything else but as having lost a US Presidential election?
Now it's Barack Obama's turn at the Presidency - time to deliver. The world is watching!