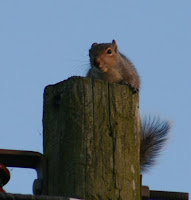 This morning was warm and bright after the recent cold weather. I spotted a Grey Squirrel in our back garden - I have sometimes seen one running along the wall at the end of the garden, and they are quite common in Dublin. The Squirrel ran into the garden shed, so I waited until he came out before I went in to start the Harley - no point in killing the poor little thing with the shock of such loud noise. 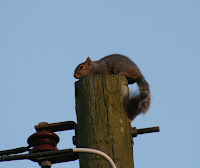 After it came out of the shed it danced around the end of the garden, stood up on its hind legs - before scrambling up the electricity pole at the corner of the garden. I ran inside to get my camera and as the pictures show he went right to the top of the pole. I took a lot of photos (24 to be precise!) hoping to get one that would look good. I felt like a National Geographic photographer! The squirrel mostly clung to the edge of the pole, but on two occasions it sat on the top - the early morning sun was just about enough to make it visible in the photos (click on photos to see larger version).
The squirrel stayed on the pole for a long time. It's hard to tell if a squirrel is scared, but I thought that it might not have been able to climb back down - then I remembered that they are very skilled climbers. He might also have been basking in the sun to warm up - he mostly stayed on the sunny side of the pole.
Nice to see wildlife in the middle of the hustle and bustle of the city.