Continuing my research into the 1901 Census, today I am focussing on my mother's side of the family. Her surname was Byrne, but as many before me have found - names have been spelled differently in the past. In the 1911 census, the family record featuring my grandfather Paddy Byrne was "Burns". In the 1901 census, James Byrne and Margaret Coburn are listed as Residents of a house 4 in Ballincor (Redwood, Tipperary) - he was a "Farm Servant" and she was a "Domestic Servant". In this record his surname is given as "Byrne". James married Margaret on 29th January 1903 - their marriage registration shows the surname "Byrne".

The 1901 census form shows that my Byrne/Burns great-grandparents were working as servants on a farm. James is listed as "Can Read", and Margaret is listed as "Cannot Read" - neither are listed as being able to write. Perhaps this might explain some confusion over the spelling of their names. It should also be noted that the census form was probably filled out by the Head of Household Denis Maher, and he may not have checked the spelling of James' surname with him. According to the Enumerator's Return Form, the house they lived in had a thatched roof with either 2, 3, or 4 rooms. With 10 people in the house it must have been very crowded. Though there is no evidence of this, I would not be surprised if some or all of the male servants lived in sheds or farm buildings. 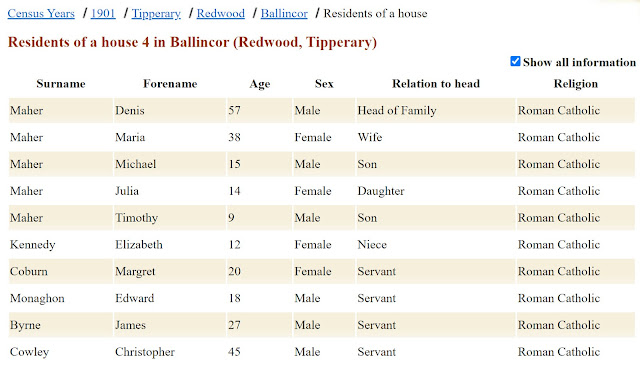 The confusion over the surnames Byrne and Burns has made further research about this side of the family difficult. For example, within the family we know that James Byrne served in the British army from the beginning to the end of the first world war. He most likely enlisted in the Leinster regiment in Birr, Co Offaly - but there is no record of his service. I have never seen a photograph of either of these great-grandparents, though I expect they do exist. My great-grandmother Margaret Byrne lived until 1965 - I remember my mother visiting her in hospital, but little boys were not allowed on the ward.