Wednesday was the 120th and 110th anniversaries of the 1901 census and 1911 census respectively. For anyone who has searched through their family histories they are a mine of information, and a fascinating look back in our history. It is also interesting for me and others of my age in that they were taken at the time when my grandparents were small children. My maternal grandmother Kathleen Cullen was born on the 14th April 1911, so missed out by two weeks on being recorded for posterity. However, both my grandfathers and my maternal grandmother were recorded.

My maternal grandfather Paddy Byrne was born on 20th July 1905 and was 5 years old for the 1911 census. His record was difficult to find due to the spelling of his surname. His father (James) spelled the surname with "Burns", which became "Byrne" in the 1920s. The record is located at Residents of a house 17 in Ballyquirk (Lorrha West, Tipperary) 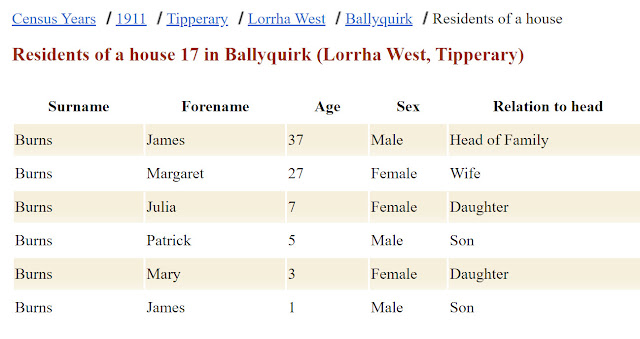 My paternal grandfather was born on 22nd December 1904 and was six years old for the 1911 census - he was an only child. His first name is recorded as "Pattie", and the surname is spelled "Loughlin" instead of "O'Loughlin". His mother Bridget had died in 1906. Note also that there is a cousin "Eugene" listed. The record is located at Residents of a house 3 in Barnacurra (Barnacurra, Cork).

My maternal grandmother was born on 28th August 1903 and was seven years old by the time of the 1911 census. Interestingly, her first name is recorded as "Katty". This family was originally hard to find, but one of my cousins living in Newmarket found a "Hurby" family recorded and sent me the link. The hand writing on the original census form is difficult to make out, but this "Hurby" family names, age, and location matched my grandmother's family, so I reported the error in the surname and it was corrected within a few weeks. The record is located at Residents of a house 2 in Church Street (Newmarket, Cork). 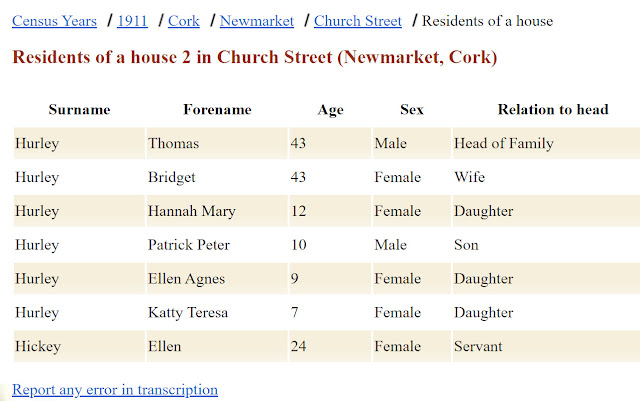