Last weekend while driving from Carnew (in Co Wicklow) to Camolin (in Co Wexford) I came across an interesting set of ruins at the side of the road near Askamore, and stopped to see what it was. It turns out that these ruins were the remains of what were termed as "Blue Schools" - only about a metre high wall remains if what was once a two-roomed school. A sign at the site tells us that this was one of five schools in the parish of Askamore. In 1825 there were 36 pupils attending this school - 34 Protestants, and 2 Catholics. Some of the other four schools were "hedge or pay schools" - in all there were 230 pupils attending the five schools. The one below is called a Blue School. These were intended for poor and/or orphaned Protestant children - this one was built under the patronage of Earl Fitzwilliam of the nearby Coolattin Estate.

I stood on the walls and wondered what it must have been like for the 36 pupils attending this school. Their teacher was Mr James Hall, who earned seven pounds (£7) a year. The school cost fifty pounds (£50) to build - very simple construction as you can see below. 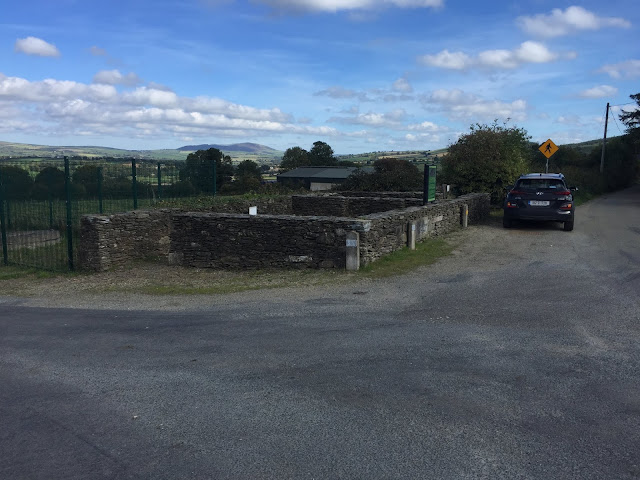 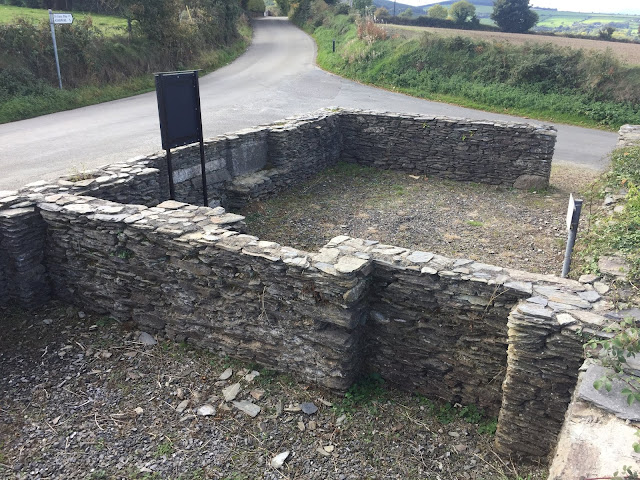 I wondered what the classroom looked like in 1825 - did the pupils have seats and desks? Did they have paper and pen, or did they use chalk and slate. Was there enough for everybody? Did Mr Hall have a modern blackboard (which was only invented in 1801)? Certainly the conditions would have been very crowded, but these students were lucky to have a roof over their heads. Did any of the 1825 pupils go on to greater things? Who knows!

Certainly, education in 1825 was a lot different. Compare this to an article in yesterday's Guardian newspaper where Donna Ferguson writes (quoting a teacher): "I will never return to teach in England" as up to 15,000 teachers in England are "snapped up overseas each year, driven away by the stress in British school". I do not wish to belittle the lot of teachers, but many cite huge workloads, low pay, stress and other health issues, long hours, and better opportunities abroad. I wonder what Mr Hall would have thought?