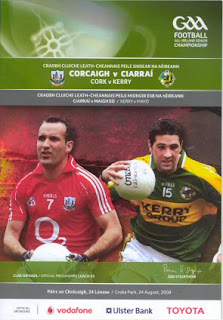 Today Kate and I went to Croke Park for the All-Ireland football semi-final between Cork and Kerry. This is our first trip to GAA HQ of this year's All-Ireland Championship. Kate drove to the IFSC where we parked our car in the NCI car park. We had lunch in New York Grind after which we headed to Croke Park.

There were 35,000 people at the match - Croke Park still looks empty even with this amount. We were entertained by the Cork and Kerry supporters arround us - lots of shouting at players and arguing between themselves - good humoured banter.

As for the match itself - Kerry were very good and Cork were woeful. Even though Kerry missed loads of chances they were eight points up with five minutes to go and cruising. Many Cork people had already left the stadium in disgust. Two goals in injury time for Cork levelled the match - the Irish Times described it as "Like Lazarus, Cork rise from the dead". The Cork supporters celebrated as if they had won the All-Ireland itself! A great exciting finish to what was a good match.

On our way back I called into the College to pick up an office chair - this I hope to turn into a bar stool using my old Harley Davidson leather seat.