Today was about rain. It started with thunder and lightening in Dún Laoighaire Harbour about 10 minutes before boarding the HSS. I was chatting to other bikers when the heavens opened. The ferry crossing was fine, but it was lashing rain when I disembarked.

I'm sure that North Wales and especially the Snowdonia region are beautiful, but it was almost impossible to see through the driving rain. I was reduced to 20 and 30 mph on several occasions on some twisty roads that I did not expect - I was on the A5. The rain eased off by the time I got to Shrewsbury, I had a few more showers during the rest of the trip, but the rain never stopped altogether. A thoroughly miserable trip through Wales.

I had some light relief along the way. At a Stop-and-Go roadworks in Wales I stopped beside a field with a small herd of buffalo - how I wished I was on the dry prairies in the American mid-west at that moment. In Wales they have wonderful unpronouncable names: Betws-y-coed (Betty goes to a coed school?), Cerrigydrudion, Ty Nant, - I also saw a statue to Owain Glyndwr (a Welsh hero).

In England I had some fun looking at number plates - some interesting three letter combinations ONE, NOT, UHT, - I also saw PNE (Preston North End) and even EOL (your's truly!). I made good progress as I passed through the M54, M6, M5, M4, M3, and M27. I arrived in Portsmouth about 7 hours and 300 miles after leaving Holyhead - below is a Google Maps record of my route: 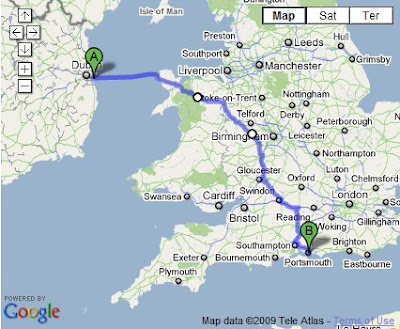 The Ibis hotel that I am staying at is OK - it was easy to find and is close to the docks for my early departure tomorrow morning. However, the heater in my room is not working - so I can't dry out my gear. Both my boots are wet (mental note - buy new boots), which won't be a problem if it is dry tomorrow in France. My jacket is a bit damp, but should be OK. Nothing is cheap here - I have had a fish and chips dinner and a couple of nice pints of Worthington's Free Flow (£20). Even this Internet connection is £7 for two hours.
I watched the end of Spain vs Russia (3-0) in the European Championship - looked a bit one-sided. Everybody will be up for Spain in the final against Germany - but I will be supporting the Germans as I have €10 on them to win at 6/1! Deutschland Uber Alles!