My YouTube Channel has passed a landmark figure on reaching 25,005,845 views yesterday. This is the total number of views since I set up the channel on 7th April, 2006. YouTube was just 13 months old (it was founded in February 2005) at the time and this was just before the Google takeover in October 2006. I could not then have anticipated that I would go on to be a YouTuber with 25M views and 57K subscribers.

The number of daily views on the channel has shown almost exact similar patterns over the years. For example, it is currently experiencing a seasonal summer downturn, with views expected to rise again in September. There has been a steady decline in the number of views over the past two years. I put this down to ageing videos (eg, How To... in Excel 2010), as well as a lot more competition. Videos concerning data analysis are now dominating the view counts - Simple Linear Regression has for the past three years been the most popular video. The United States still makes up most views (32%), with India next (14%), followed by the UK (8%), the Philippines (5%), and Canada (5%). Ireland is the 13th most popular location with just 1% of total views. 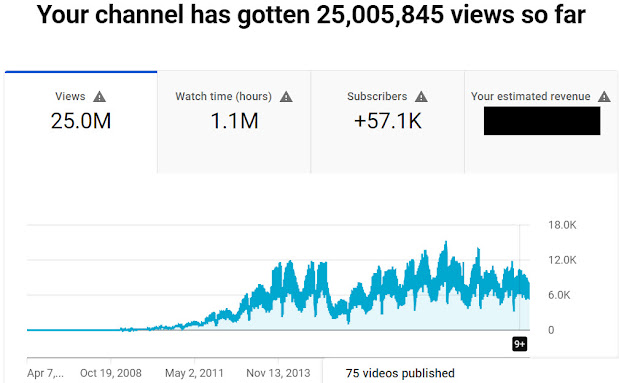 As always - I continue to be amazed that the Channel has grown so much. Of course, it is an extremely modest number of views and subscribers compared to real influencers. All of the videos are "How To..." educational Learning Objects - there are now 280 videos in the channel. I plan to add more to this by competing my series of Programming in R in the next couple of weeks, and producing a few more Statistics videos. However, there will be every little over the summer.
A huge THANK YOU to every viewer who has clicked on one of my videos - I am very grateful for your time and support. As I say at the end of every video: "I hope you found this video useful, thank you for your attention".