Over Christmas I was reading the "Covid-19 Lives Lost" series in The Irish Times. It is dedicated to "Those who have died in Ireland and among the diaspora led full and cherished lives. This series is designed to tell the stories behind the numbers". There are 68 people listed to date and it makes for very sad reading - each death of course affects 68 families. There were some couples who died within days of each other, at least three priests, two died just short of their 100th birthdays, and there was one from 1959 - the same year I was born. What struck me most was that so many of the stories were about people born in the 1920s and 1930s. They lived very long lives, but were cut down in the end by a cruel virus.

While not a scientific study, I decided to note the year of birth for each of the 68 people listed. The year of birth varies, but sadly they all have on thing in common: 2020 as the year of death. The chart below illustrates the cruel nature of the virus. Nine of the deaths occured in those born in 1937, while eight occured in those born in 1926, 1931, and 1935. Let's hope that the new vaccines will stop these deaths so that our parents and grandparents can live out the rest of their lives in comfort. 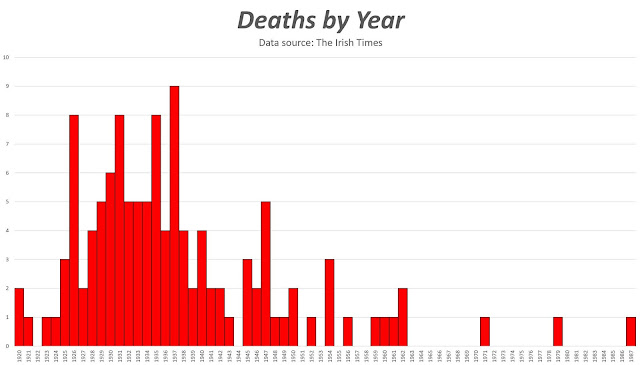