Amsterdam is just 1 hour and 20 minutes flight time from Dublin - but this weekend is my first ever visit (not counting an airport stopover) to this wonderful city. I can't believe it has taken me over 58 years to finally decide to visit the largest city in The Netherlands. It is always wonderful to experience and learn from other cultures. We have so mush in common, yet there are so many differences. The English language is very common everywhere - we were greeted in English and spoken to in English all the time. In fact, I don't recall anyone greeting or talking to us in Dutch. In several of the places we went, signs were in English only - I wonder what the Dutch think of this? 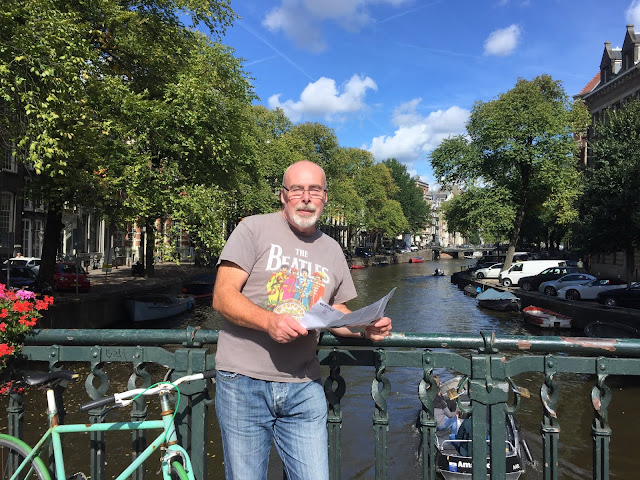 Canals of course are everywhere - we took an evening cruise, but this was not particularly interesting as you will miss a lot in the dark. One thing I will remember it for is the Worst Pizza Ever, which was served up to us on the barge. Other highlights included a visit to the (very) crowded Anne Frank's house, the Red Light District, the Heineken Experience, the Rijks Museum, Rembrandt's House, and finally the Jewish Museum and Holocaust Memorial. References to the Holocaust are very matter-of-fact - over 104,000 Jews were transported from The Netherlands to death camps. In Anne Frank's house there is not actually that much to see - but being in the same rooms that this wonderful writer hid in for two years before her own death in Bergen-Belsen concentration camp was an eerie feeling. I've experienced it before at the Holocaust Memorial in Berlin the almost complete silence that visitors to the museum wonder around in. Contrast this to the noisy Rijks Museum.

Amsterdam for the most part seems to be a city of young people, with a lot of them cycling around all the time. Bicycles are everywhere, and I was interested to learn that smaller motorcycles can go in the cycle lanes. No helmets are required on smaller scooters - though I saw plenty on bigger ones not wearing helmets either. I didn't sample any of the head shops that are everywhere - I was not keen to learn about being stoned! I'd love to go back - a weekend is not enough time to enjoy this city. Below is our Heineken Karaoke Experience - "Tulips in Amsterdam"!