Researching and learning about my family tree has been an ongoing enjoyable experience for me. In some branches of my family I have managed to trace ancestors back to the late 1700s. I use Ancestry for my tree and it is a fantastic tool for both managing and researching the tree. It turns out that a very distant cousin lives close by my neighborhood and when I visited him recently he showed me the photo in its original frame below which features our mutual great-great grandfather - Richard Cullen: 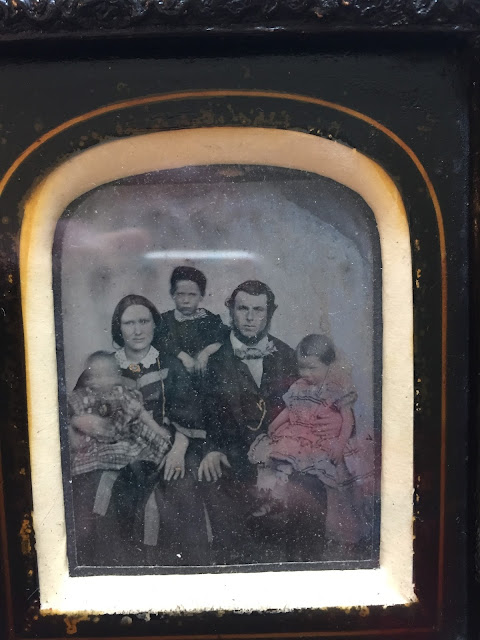 We estimate that the photo was taken in the early 1870s. The photo features Richard and Julia Cullen, with their three sons (left to right) James, Bryan, and Richard. Photography was still in its infancy back in 1870 - it was invented in 1839 only 30 years earlier. No doubt people had to be perfectly still for the photograph - the Cullens were probably disappointed that the two younger lads could not keep still and their faces are sadly blurred. The boy on Richard's knee, also Richard, is my maternal great-grandfather. Richard senior was married three times. First to Mary Kate Giles (they lived in Wales) - they had two sons - Bryan and James in the photo above. His second marriage was to Julia Browne (they lived in Gorey) - she was one of eight Browne sisters from Gorey. They had five children: Richard (in the photo above), Patrick (who died as an infant), Mary Kate, Margaret, and another Patrick. His third marriage to Jane Cullen was childless. Four of the family are buried in St Michael's Cemetery in Gorey, Richard junior is buried in Mt Jerome Cemetery in Dublin, I don't know where James is buried.